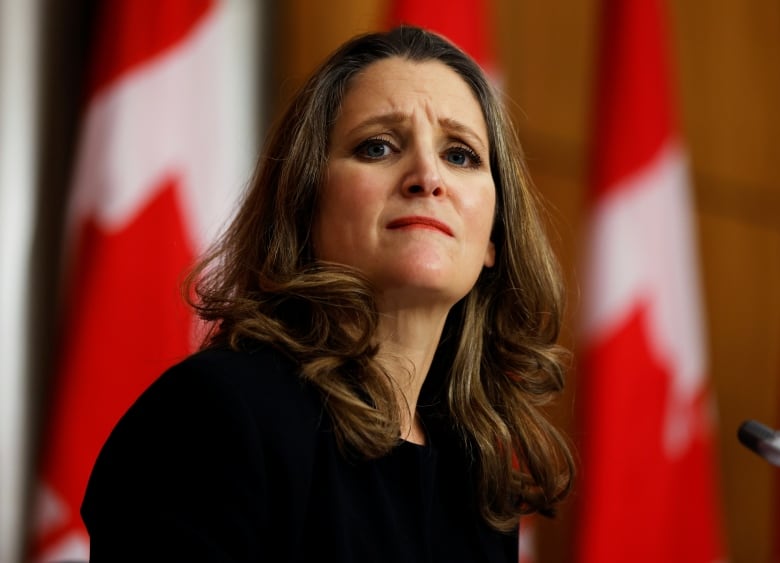 “COVID-19 has placed extreme pressure on health care systems across the country. The pandemic is still here and many parts of our country are facing the threat of a third wave right now,” Freeland told a virtual press conference.

“This money will ensure that our health system will not buckle under the continued strain of the pandemic, under the pressures of the third wave and new variants.”

The proposed cash injection is detailed in a new bill, C-25, that Freeland tabled in the House of Commons this morning.

If passed, it would provide a $4 billion one-time increase to the Canada Health Transfer — the federal government’s primary contribution toward the cost of delivering health services in the provinces and territories. Another $1 billion would fund COVID-19 immunization campaigns across the country.

The remaining $2.2 billion would go to the Gas Tax Fund — a twice-yearly payment to provinces and territories which, in turn, transfer funds to municipalities to support local infrastructure priorities.

The announcement comes just less than a month before the Liberal government unveils its first budget in over two years.

The budget is expected to provide a full accounting of all government spending through the pandemic, which has sent the deficit for the fiscal year to almost $400 billion.

It is also expected to outline the Liberals’ plan to spend between $70 billion and $100 billion over the coming years on stimulus to help the economy recover.

“We recognize the vital role that immediate investments in local infrastructure play in addressing the needs of cities and towns, as well as Indigenous communities, across our country,” said McKenna. “And of course, this is about getting Canadians back to work.”

The $4 billion increase to the federal health transfer falls well short of the $28 billion boost premiers have been pushing for.

Right now, the provinces spend about $188 billion on health care and the federal government covers $42 billion — roughly 22 per cent of total costs. Premiers have asked for a permanent increase in the federal share to 35 per cent cent, which works out to an additional $28 billion and would bring the total federal share to $70 billion.

Premiers are asking the government to maintain this contribution level over time, with a minimum annual escalator of five per cent.

Prime Minister Justin Trudeau has said the federal government will keep its spending focus on emergency aid for the time being and won’t talk about long-term health care funding until after the pandemic is over.

Last summer, the government provided $19 billion to the provinces and territories through the Safe Restart Agreement to cover some of their costs related a number of priority areas in the fight against COVID-19.

During question period in the House of Commons, Bloc Québécois MPs criticized the government for not meeting the premiers’ demand on health care spending.

“Short-term funding, while helpful, does not allow the provinces and territories to address the long-term health care needs of Canadians,” said Therrien in French.

“Will the government commit to increasing health transfers on a recurring basis to cover 35 per cent of costs?”

Hajdu replied that the government has supported provinces with purchases of vaccines, PPE and medical equipment throughout the pandemic.

“We will do whatever it takes to get Canadians through this pandemic and back on the road to recovery.”

To back her call for a “substantial” increase to health transfers, Bloc MP Andréanne Larouche cited a study released today by the Canadian Medical Association. The study predicts that a doubling of demand for elder care by 2031 will increase the annual cost of caring for aging Canadians from $29.7 billion per year in 2019 to $58.5 billion per year in 2031.