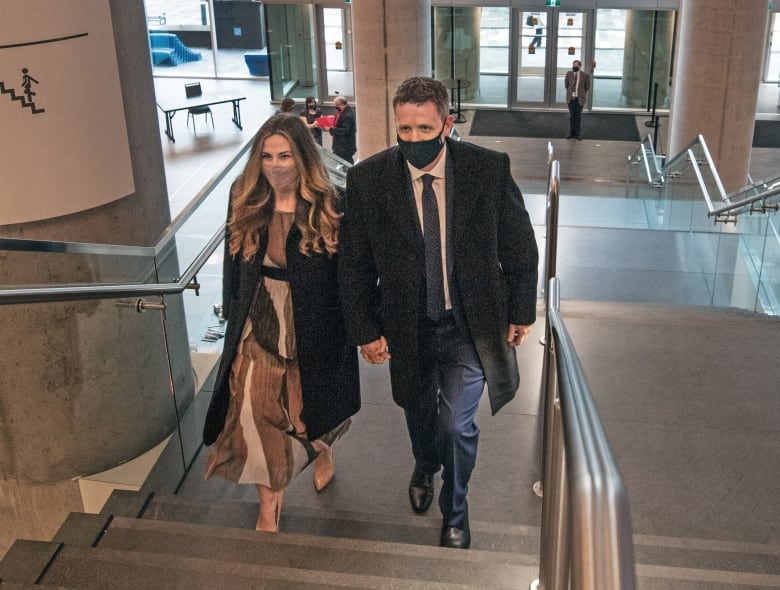 Premier Iain Rankin is placing his two leadership rivals in prominent posts as part of his new cabinet.

Rankin and 16 cabinet ministers were sworn in during a ceremony Tuesday in Halifax. Along with being premier, the Timberlea-Prospect MLA is the minister of the Department of L’Nu Affairs, formerly the Office of Aboriginal Affairs, and responsible for youth, military relations and the Office of Citizen-Centred Approaches.

The path Rankin laid out Tuesday plays on several of the key themes of his leadership campaign, including an overarching emphasis on addressing climate change throughout all government departments, and the creation of new government offices to focus on equality and systemic racism, as well as mental health and addictions.

“We have just begun that long awaited journey of dismantling system racism. Still, there is much more we can do and we are ready to do it,” Rankin said in remarks during the ceremony.

“There is more work to be done on the environment, and one of the biggest threats to our planet — climate change — is now explicitly mentioned as part of the new Department of Environment and Climate Change. The work we will be engaged in will be one of the greatest opportunities of our economic recovery efforts.”

Rankin’s leadership rivals assume key roles in his cabinet, one in particular.

Halifax Citadel-Sable Island MLA Labi Kousoulis, the runner up to Rankin earlier this month in the Nova Scotia Liberal Party leadership, is the new finance minister. Kousoulis also becomes minister of the Department of Inclusive and Economic Growth, formerly the Business Department, and takes on responsibility for trade.

Kousoulis said he was pleased to be taking on so much responsibility, something he said played to the strengths of his professional background as an accountant and small business operator.

The minister said he would soon sit down with Rankin to discuss the upcoming budget and what final changes might be possible. Although much of the budget is already complete, Kousoulis said he’d be looking at what priorities from Rankin’s leadership platform can make it into this budget and what might have to wait for the future.

“Fortunately, for the last seven years our house is in good financial order,” he told reporters. “With COVID, we’re not presented with a structural deficit, we’re presented with a deficit because of the pandemic, and the work will be to ensure that we’re supporting Nova Scotians and getting ourselves back on a good solid financial footing for generations to come.”

Antigonish MLA Randy Delorey, who finished third in the race, is the new justice minister and attorney general. He also becomes minister of labour relations.

Bedford MLA Kelly Regan continues on as minister of community services, along with becoming deputy premier. She’s also taking on the Department of Seniors.

Regan, a prominent backer of Delorey’s leadership bid, said she sees her new role as deputy premier as a sign of unity. She plans to reoffer in the next election.

“I think that it’s a cohesive team, that we’re all together after a leadership race.”

Irving, an architect by training, lived and worked in the Arctic for 20 years where he saw first-hand early indications of climate change.

“We were the canary in the coal mine 20 years ago, but now Nova Scotians are seeing the effect of climate change in their day-to-day lives,” he told reporters.

That experience, along with his time on Treasury Board, positions him well to ensure an environmental lens is applied to as much government policy as possible, said Irving. This will not a case of choosing the environment over the economy, he said, but finding a way to marry the two.

“If you talk to Nova Scotians, whether it’s students on recycling or talking to municipalities who want to do solar projects or talk with farmers and their concerns over the climate change and looking for ways to innovate and be more sustainable in … the agricultural sector, all Nova Scotians I think are really interested in us doing more for the environment.”

Yarmouth MLA Zach Churchill goes from four years of heavy lifting as education minister to even heavier lifting as the new health minister. He will also oversee the new Office of Mental Health and Addictions.

Churchill takes over the portfolio in the midst of the COVID-19 pandemic as the province continues the rollout of its vaccine program. He acknowledged the magnitude of the task ahead while speaking with reporters.

“This is the major department in government at a time of a pandemic and I’m quite energized to get in there to do my part to be a steward of that department while I’m there.”

Chuck Porter is the new lands and forestry minister and also becomes responsible for the Department of Energy and Mines. Porter’s role also becomes prominent, as Rankin has pledged to implement the recommendations of the Lahey Review on forestry practices this year.

Derek Mombourquette is the new education minister, marking a major promotion for the former energy minister.

Tony Ince will lead the new Office of Equity and Anti-Racism, as well as continuing to oversee the Office of African Nova Scotian Affairs. He will also now oversee Communications Nova Scotia.

A big part of Rankin’s campaign focused on social justice issues, and he said it was important to reflect that priority with the creation of the new office that will also help ensure the economic recovery from the pandemic does a better job sharing prosperity.

Lena Metlege Diab will continue as immigration minister as well as being responsible for the Department of Labour and Advanced Education, as well as Acadian Affairs and Francophonie.

Geoff MacLellan, the only person to be included in cabinet who has announced they will not reoffer in the next election, will oversee the new Infrastructure and Housing Department, while Lloyd Hines will be minister of the Department of Transportation and Active Transit.

Keith Colwell continues as minister of agriculture, and of fisheries and aquaculture, Patricia Arab stays on as minister of Service Nova Scotia and internal services, and Suzanne Lohnes-Croft remains minister of the Department of Communities, Culture and Heritage, as well as Gaelic Affairs.

Rankin said he remains committed to the previously established return date of March 9 for the spring sitting at Province House.

He said he wants to meet with opposition leaders to discuss areas of common ground ahead of that. Rankin was scheduled to meet Tuesday with NDP Leader Gary Burrill. A meeting has yet to be set with Tory Leader Tim Houston.

“We have a majority. I’ll work with the team that I have, but also just by instinct my philosophy is to work with others in different parties.”