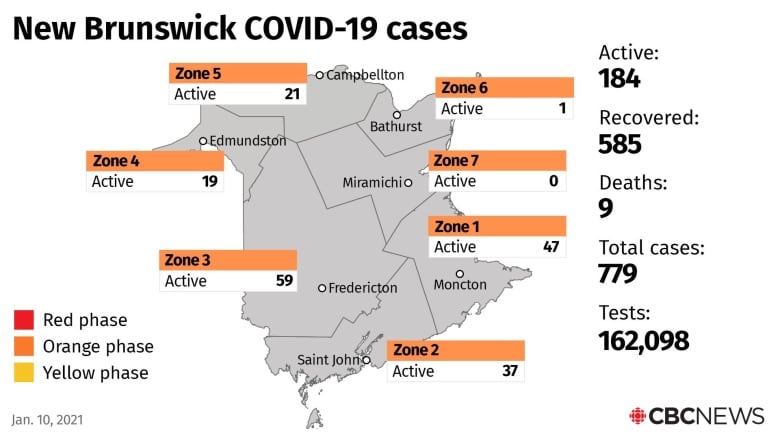 Shannex Tucker Hall reported late Saturday that the new cases were one resident and two employees.

There have been 24 total cases confirmed at the facility, which has 90 beds and about 130 employees. All residents and staff are expected to be retested on Monday and Thursday.

The home experienced a resurgence of COVID-19 this week, reporting 15 new cases on Tuesday.

The long-term care facility is one of four in New Brunswick with active COVID-19 cases.

There is currently one employee case at Canterbury Hall, a Shannex assisted-living facility in Riverview.

One case was also confirmed at both Fundy Royal Manor II, a 28-bed special care home in Hillsborough, and Foyer Ste-Élizabeth, a 50-bed nursing home in Baker-Brook, near Edmundston.

The new cases include:

The province has reported 178 cases in the last 10 days.

There are 59 active cases in the Fredericton region, 47 in the Moncton region, 37 in the Saint John region, 19 in the Edmundston region, 21 in the Campbellton region, and 1 in the Bathurst region.

The Miramichi region (Zone 7) is the only part of the province without a confirmed case of COVID-19.

Hundreds of New Brunswick parents are expected to be contacted today after four more schools reported positive cases of COVID-19.

Public Health officials asked all staff and students at two Woodstock schools to self-isolate over the weekend to allow time for contact tracing.

Three cases were announced at Woodstock High School and one case at Townsview School.

Both schools will have “operational response days” on Monday, meaning students will stay home while staff prepare for remote learning.

Students are expected to be learning from home until at least Friday, when the situation will be re-assesed. Families will be notified if changes are made for the following week.

Contact tracing is also underway in the Campbellton region after two schools confirmed cases of COVID-19 on Saturday.

One case was confirmed at both Académie Notre-Dame in Dalhousie and Polyvalente Roland-Pépin in Campbellton, according to Public Health.

In the case of the Campbellton area schools, only those contacted by Public Health will need to self-isolate.

The province said operational response plans are being rolled out at those schools and staff will reach out to families directly by Sunday evening about any impacts on learning.

The Anglophone West School District said it plans to contact families with an update before the end of the weekend.

The school cases come as the province experiences an uptick in cases in the new year, rising to 171 active. Officials announced 30 new cases on Saturday.

Most of those cases have been reported in the last nine days, sending New Brunswick back to the orange phase and prompting Nova Scotia to tighten travel restrictions.

New Brunswick is continuing to administer second doses of the vaccine against COVID-19, which began on Saturday.

Those who received the shot in late December were invited to return to Miramichi for a second dose of the Pfizer-BioNTech vaccine.

Louise Haché, a family doctor in Tracadie, was part of the first group in the province to receive a second dose of the vaccine on Saturday.

Haché said she has felt well after both shots and the only side effects experienced were a sore arm and slight headache.

“I feel privileged to have received the vaccine,” she told Radio-Canada.

“There is a much greater risk of catching the illness than having side effects from the vaccine, so get yourself vaccinated.”

New Brunswick has confirmed 779 cases of COVID-19 since the start of the pandemic. There have been 585 recoveries and nine COVID-related deaths. The death of a 10th person with COVID-19 was unrelated to the disease.

What to do if you have a symptom

People concerned they might have COVID-19 symptoms can take a self-assessment test online.

In children, symptoms have also included purple markings on the fingers and toes.

People with one of those symptoms should: