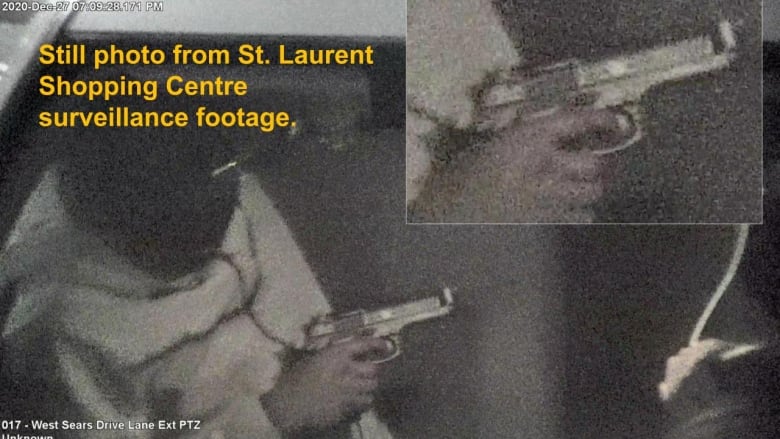 The Ottawa Police Services Board said officers responded “reasonably and responsibly” during an incident at the St. Laurent Shopping Centre, where police arrested a group of young Black men shooting a music video.

During an OPS board meeting Monday night, Police Chief Peter Sloly presented the service’s side of the story after he said the incident was “the subject of a massive amount of misinformation online, in mainstream media and within the community.”

CBC reported the incident in December, describing how police handcuffed a group of young Black men, waiting to shoot a music video, at gunpoint. Community advocates have described the incident as racial profiling.

Sloly showed an image taken from mall security camera footage from Dec. 27, the day police responded to the 911 call. The screenshot shows a person inside a vehicle, wearing a ski mask and holding what looks like a firearm.

“It is, in fact, an almost perfect replica of a 9mm Beretta handgun. It has the exact look, weight and feel of the real model. For the average person, it is almost indistinguishable,” Sloly said.

The only difference between the two, he said, is something called the borehole, which is the hole bullets are fired from. The replica’s is smaller than that of the real thing.

Sloly said officers “treated it as a real call for a real crime in progress that involved a group of people armed with a potentially deadly firearm, which was taking place at a mall frequented by families and children.”

It was shortly after the arrests were made that police confirmed the firearm was a prop and the six people involved were released without charges. Sloly said it all took less than 20 minutes.

He said the young men involved were advised of the proper protocol to film with replica firearms and then “the officers drove them home to their parents.”

An investigation into the police response concluded officers involved “acted appropriately and professionally in this incident,” Sloly said.

He said OPS have made numerous attempts to reach out to the young people involved in the incident but have not gotten a response. There have also been no formal public complaints about the incident, he said.

Screenshot does not show ‘full context’

In a statement sent to CBC, Chris Simba, one of the people involved in the arrest, responded to the presentation saying “the explanation made by Chief Sloly did not represent the accuracy of the events that occurred on that day.”

“Only choosing to provide a still-image without providing the full context is not transparency to the public,” Simba wrote.

“The bb gun was a prop for a film production to raise awareness. It was never brandished outside of the car to ignite a public safety response from Ottawa Police that resulted in 20 police officers with rifles pointing at a group of minors,” he said.

Simba went on to write that the group involved in the incident continues to ask for the full security footage to be released, including of the arrests made by police.