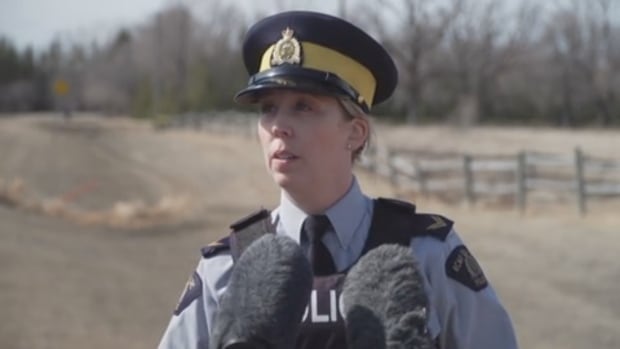 RCMP have arrested a man in connection with a double homicide at a property in the rural municipality of Taché.

At about 1:15 a.m. Thursday, officers with the St-Pierre-Jolys RCMP detachment responded to a disturbance call about a property on River Road.

They arrived and found two adults, a man and a woman, who were dead. Both deaths are being treated as homicides.

“We know that this crime will be devastating for so many in this community,” Cpl. Julie Courchene told reporters Thursday at a news conference near the crime scene, just east of the town of Lorette, southeast of Winnipeg.

Shortly after RCMP found the pair dead, they received a report about a suspicious male. Officers found a man nearby who was arrested and is considered a suspect, she said.

Police have been door-knocking all morning in hopes of gathering more information, Courchene said, but there is no ongoing threat to public safety.

It isn’t clear whether the man and the victims knew each other, she said.