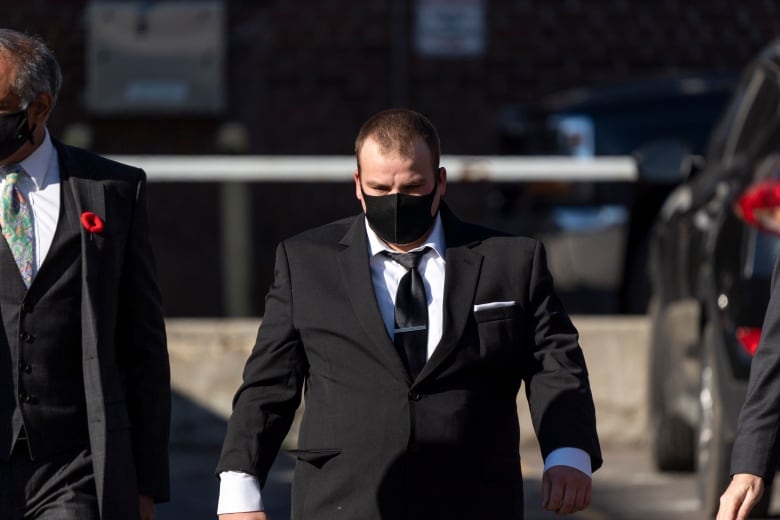 More than four years after Brayden Bushby threw a trailer hitch from a moving car, striking Barbara Kentner of Wabigoon Lake Ojibway First Nation in the abdomen while she was out for an evening walk with her sister in a residential neighbourhood in Thunder Bay, Ont., family members will have a chance to tell the court how Bushby’s actions have caused harm to them and the broader community.

Kentner died six months after being hit by the trailer hitch. In December 2020, the 22-year-old man was convicted of manslaughter in her death.

The sentencing hearing is scheduled to take place at the Thunder Bay Courthouse this morning, starting at 10 a.m.

It is expected to begin with a number of family members and friends, as well as community representatives addressing the court to share victim and community impact statements.

Bushby is then expected to address the court in response, according to his lawyer Ryan Green.

Lawyers for the Crown’s office and for Bushby will then file submissions that Superior Court Justice Helen Pierce will consider in her ruling on sentencing.

They do not expect a ruling on sentencing to be issued on Wednesday.

Watching for acknowledgement of racism

After relatively little discussion about the role of racism in the actions of Bushby — who called out “I got one” after the hitch struck Kentner — Christa Big Canoe says she is watching for the Crown attorney to raise the issue as a motivating factor in the offence.

Big Canoe, the legal advocacy director for Aboriginal Legal Services, says there is a history of bottles, garbage and other items being thrown at Indigenous people in Thunder Bay.

Big Canoe was the lawyer representing six of the families involved in the Seven Fallen Feathers Inquest in 2016, which investigated the deaths of a number of young Indigenous people in the city.

“I remember sitting through the testimony of those young people as they talked about having bottles thrown at them,” she said. “I watched them time and time again look at their feet in shame, telling the story about how someone victimized them, and they felt shame.”

There is a section of the Criminal Code that allows the presiding judge to consider whether an offence was motivated by bias, prejudice or hate when ruling on the sentence. That could result in a longer sentence.

“The Crown should be making submissions that take into account this is an Indigenous woman, and they should ask the court to take judicial notice of the violence and harm that happens to Indigenous women in this country,” said Big Canoe.

“If those submissions aren’t made, then a huge opportunity has been missed and it would be kind of a travesty of justice.”

Looking for sentence that serves justice

Donald Worme, a founding member of the Indigenous Bar Association, said he’s looking for Bushby to receive a sentence “that will properly denounce the outrageous behaviour that took the life of Barbara Kentner.”

He said a message must be sent “so that the general public is deterred from engaging in similar conduct that would lead to the loss of life of innocent Indigenous people who are doing nothing more than simply walking on a city street.”

Worme will be reading a community impact statement on behalf of the Indigenous Bar Association during the sentencing.

“The life of the deceased, Barbara Kentner, we feel must be respected in her death as an Indigenous woman,” he said. “The legal system has not reflected well in their dealings with Indigenous people in the past, and it’s our organization’s aim to change that going forward.”

“We’ve seen that too many times, an Indigenous person gets killed and nothing happens. That person somehow gets a pass from the system. And that’s our fear,” Fiddler said.

He said Indigenous and non-Indigenous people across the country will be watching the hearing closely. “They’re looking for justice for Barbara and her family.”

Audrey Gilbeau, the executive director for Nokiiwin Tribal Council, said she will also be focusing on the conversation about racism in Thunder Bay in her community impact statement during the hearing.

“We see it. I see it all the time,” she said. “And to some extent, the racism has become normalized and we have this barometer of acceptance.”

Gilbeau said, “why should we have a level of acceptance to any racism?”

She said the overwhelming attention on this trial is important, but the conversation can’t stop.

“This should be the ‘a-ha’ moment that says we really need to change,” Gilbeau said. “People are being hurt … and it impacts our community. It impacts the whole nation.”