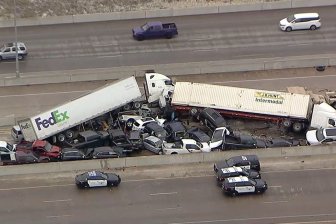 A 45-year-old man is dead after an avalanche in the area of Brandywine Bowl near Whistler.

Whistler RCMP said it was notified of the avalanche just after 2 p.m.

Multiple people were caught in the slide, including a snowboarder who remained missing when the snow settled.

“Those in the area immediately began searching for the snowboarder and Whistler RCMP and Whistler Search and Rescue headed into the Callaghan Valley area,” said RCMP Cpl. Sascha Banks in a media release.

“Approximately 45 minutes later the 45-year-old male from the Sea to Sky was located, and unfortunately he succumbed to his injuries.”

Police believe the snowboarder and two other companions were caught in a prior avalanche and were trying to get out of the area when a second slide occurred.

Police and the BC Coroners Service are both investigating.

“Four serious search and rescue calls in the last three days, two of them fatal, and a multitude of serious injuries,” Banks said.

“The calls speak for themselves…the backcountry in the Sea to Sky is not stable at the moment, it’s time to wait and postpone your touring trip here for another time.”

No other injuries were immediately reported.

On Jan. 1, a skier was killed in the Brandywine sledding area after falling into a tree well.

1:58
Skier killed in avalanche near Blackcomb

Skier killed in avalanche near Blackcomb

On Friday, one person was killed and two others were injured when four people were caught in an avalanche in the “Poop Chute” backcountry area near the Blackcomb Glacier.

Avalanche Canada listed the alpine areas of the Sea-to-Sky region as being at “considerable” risk of an avalanche on Saturday.

Earlier in the day, North Shore Rescue issued a warning urging people to stay in-bounds on local mountains, and that that poor weather conditions and unstable snowpack were a recipe for disaster.