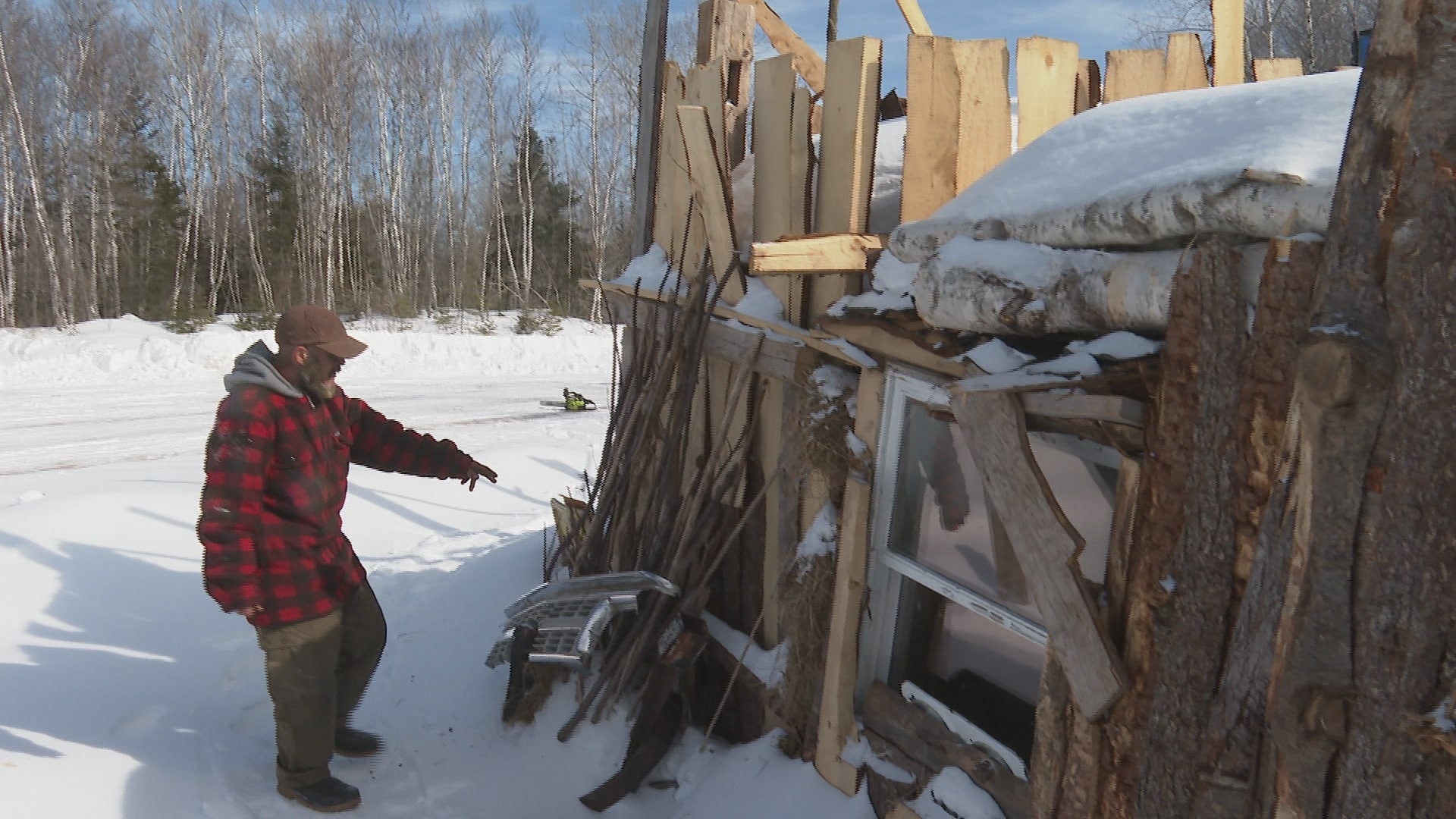 A Sussex couple say they’re looking at life a lot differently after stopping to help a man on the side of the Trans-Canada Highway.

Mike and Caroline Trueman were driving back to their home in Sussex from Fredericton, when they saw what they thought was a pile of garbage alongside the highway in Jemseg.

“I was thinking to myself, ‘Why would somebody throw their garbage out there, that’s pathetic,'” said Mike Trueman. “As I got closer to it and actually went by, I noticed a guitar case laying on the ground, and then it dawned on me, ‘That’s not garbage, that’s a person.'”

The Truemans circled back and found 50-year-old Ernie Jesso wrapped in a blanket and leaning against a guardrail.

Jesso had been walking from Oromocto back to his makeshift home in the woods off Route 10 near Long Creek,  a journey of nearly 85 kilometres.

A Sussex couple were driving home when they saw what they thought was garbage on the side of the road. It turned out to be 50-year-old veteran, Ernie Jesso. 2:58

He told the Truemans he’d started walking the day before and slept in the woods near the highway overnight. But during his travels his feet had gotten wet and started to freeze near the halfway point of his walk home.

Jesso said he’d normally hitch-hike, but that’s come to an end with COVID-19.

To the Truemans, it was obvious Jesso needed help.

So they got him in the truck to warm him up. Caroline gave him what food they had with them, a muffin, and then they offered to drive him the rest of the 45 kilometres to his home.

“When this man got out of the truck, he was happy as happy could be,” Mike said. “He was ecstatic to be home.”

Jesso has been living in a travel trailer for the last year, and he has built onto it with felled trees, scrap wood and whatever he’s been able to find.

He uses an old wood furnace for heat, and a small generator on occasion. Inside his makeshift homestead, the veteran of 34 years in the Canadian military keeps his accolades from his tours in Bosnia and Afghanistan, along with a few family photos. He said he suffers from PTSD but isn’t seeking treatment.

Skipper, an affectionate small black cat, is Jesso’s only companion in the woods.

“I don’t know how to describe what he lives in,” Mike said. “I just don’t have the words for it.”

The Truemans tried to offer Jesso more help but said he wouldn’t take it.

“He never asked us for a nickel,” Mike said. “But I think as a vet we owe it to him that he lives a better life.”

Mike said he’s returned several times to check in on his new friend, bringing him food and a few necessities.

After he posted what happened on social media, people from across Canada, including other veterans, have been asking how they can help. Some have ventured out to bring him stews, vegetables and moose-meat steaks.

“I was taught by my great father and mother never look a gift horse in the mouth … never,” said Jesso.

He’s clear that he’s not looking for charity, but he’s thankful for the kindness.

He said he goes out of his way to make sure the things people bring him that he doesn’t need go to those who do need them.

The Truemans said the simple act of helping someone in need has changed how they look at their own lives.

“What I really stopped doing was complaining about, you know, wanting a bigger house, better truck, more money,” Mike said.

“This guy had nothing, and he was happy. And I said to my wife, ‘I got more out of that than he did.'”