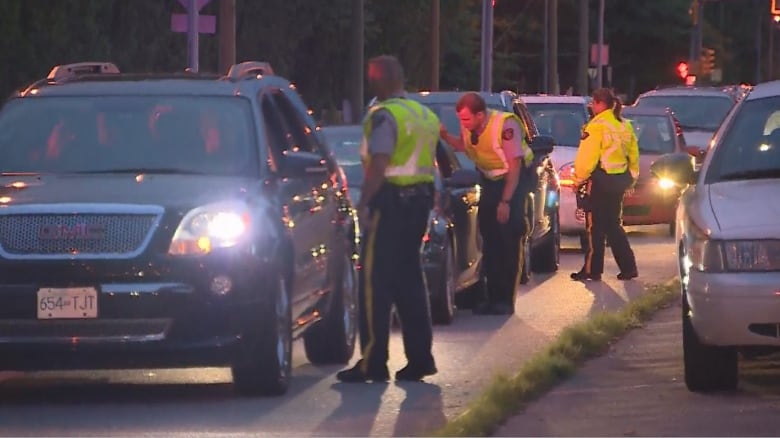 A woman who was pulled over by a man impersonating a police officer on an Okanagan highway earlier this month says the experience has left her shaken and fearful of driving alone at night.

Kristin McBride was driving along Highway 6 between Lumby and Vernon on the night of March 13 when a man in a white truck or SUV pulled up behind her and turned on a set of flashing red and blue lights installed in the vehicle’s grill. She pulled over to the side of the road and the man got out of his vehicle.

He told her he was doing a sobriety check and briefly shone a flashlight inside the car before returning to his vehicle, McBride said.

She described it as “the weirdest experience I’ve ever had,” but it was only after she read an article about a similar incident in the Boundary region that she was convinced the man wasn’t a real cop.

“At first I was pretty shaken. I told my daughter, I don’t think I’m going to be driving out at night anymore to pick you up,” McBride said.

She reported her experience to the RCMP, who issued a warning to the public and asked for other victims to come forward. They also gave her advice about what to do if something similar happens again.

“I said, ‘I’m really nervous being a single woman in a car. I don’t feel very confident in pulling over if I was to be pulled over now,’ ” McBride said.

Reached for comment on Thursday, an RCMP spokesperson said they could not comment on specifics of the case. Mounties said anyone who believes they are being stopped by an illegitimate police vehicle should pull over, lock their doors and phone 911 to check whether dispatchers have information about the officer.

Suspect pulled over a second car as well

McBride said her encounter with the suspect felt strange from the very beginning.

It was about 9 p.m. and she was returning home to Lumby after picking up her 17-year-old daughter, who had been visiting her boyfriend in Vernon.

McBride said she noticed a white vehicle pulled over to the side of the road — not fully on the shoulder, but sticking out into the lane. She slowed down, turned off her high beams and drove around it.

That’s when the other driver pulled in behind her and turned on his flashing lights.

“I was like, ‘Oh, dear, I’m getting pulled over. What did I do wrong?’ ” McBride recalled.

After he told her he was conducting a sobriety check, she wondered why he wasn’t asking more questions. She also recalled that usually when police are conducting roadside stops for impaired drivers, multiple vehicles and officers are involved.

But after the man shone his flashlight into her car, he returned to his vehicle without saying anything more.

“I was like, I guess I’m free to go. So I started driving on the highway, and I noticed he pulled up behind me and followed me,” McBride said.

He stayed behind her until they passed another car stopped in a pullout area on the other side of the road. She watched as the suspect turned around, drove into the pullout and turned on his flashing lights once again.

“It just sat with me, really uncomfortably,” McBride said.

When she read about the incident further south involving a similar-looking man in a similar vehicle pulling over a car on Highway 33 near Westbridge on March 21, “I was just blown away,” McBride said.

Since then, she’s realized how dangerous her encounter could have been. She’s thought about last year’s mass shooting in Nova Scotia, where the killer disguised himself as a Mountie, as well as the many missing and murdered Indigenous women along the Highway of Tears, as Highway 16 in northern B.C. is known.

She said that now when she drives the highway at night, she brings her dog with her, just to feel safer.

RCMP have said they don’t know if the suspect in both cases is the same person, but they’re asking anyone with information to call police.

Investigators have described the suspect in the Lumby incident as average height and weight with dirty blond hair, wearing a white button-down shirt and black or blue khaki pants.