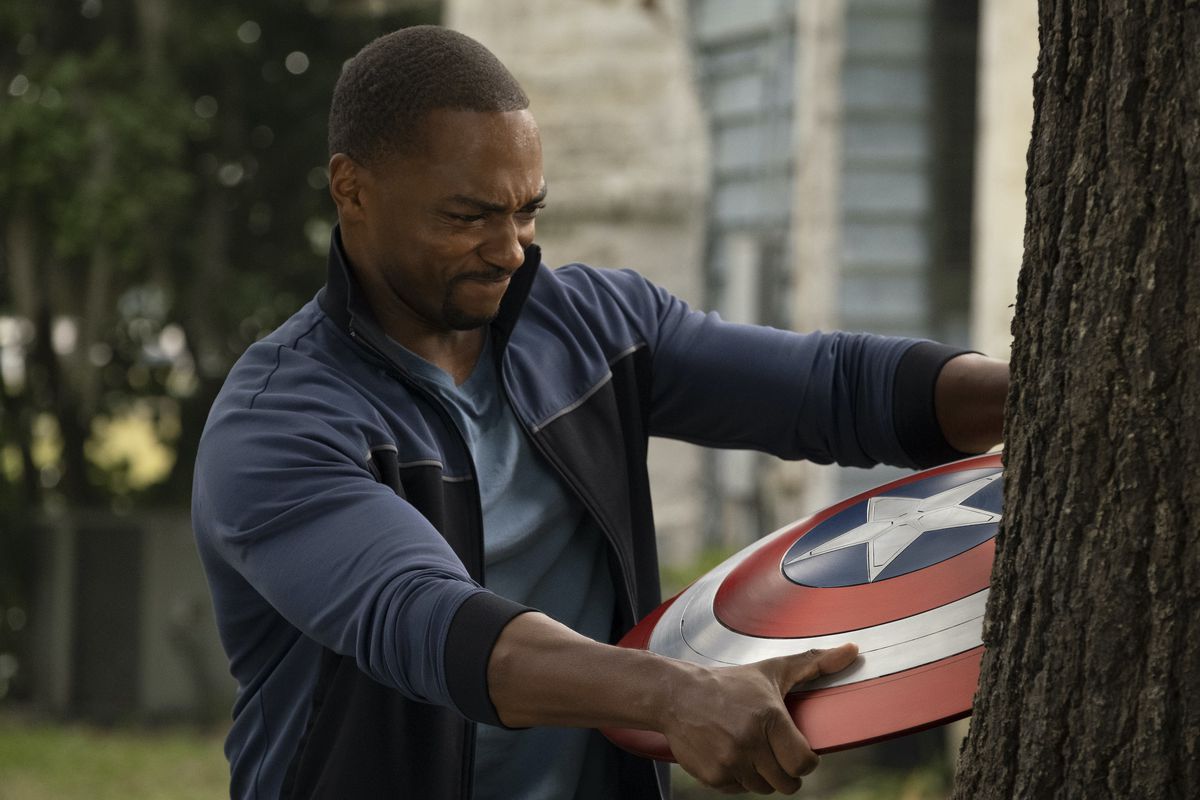 The first episode of The Falcon and the Winter Soldier took its time reminding us of all the things that have happened to Sam Wilson and Bucky Barnes recently — a Civil War, a five-year nap, Captain America’s retirement, etc. But the premiere of the Disney Plus series ended with an important introduction: one John Walker aka the new Captain America.

The Falcon and the Winter Soldier episode 2 digs a little deeper into the new hero’s backstory. And if the comics are any indication — and with the remix-ready Marvel, they usually are — it could be mean trouble for Sam and Bucky.

[Ed. note: This piece contains spoilers for the first episode of The Falcon and the Winter Soldier.]

In the last scene of The Falcon and the Winter Soldier premiere, Sam Wilson and his sister Sarah watch as a US government official reveals a new Captain America. The guy is even wielding Steve Rogers’ shield, mere days after Sam gave a speech at the thing’s new Smithsonian exhibit.

“While we love heroes who put their lives on the line to defend Earth,” says the announcer, “we also need a hero to defend this country. We need a real person who embodies America’s greatest values. We need someone to inspire us again, someone who can be a symbol for all of us.”

That man, for the United States government, is John Walker. As established in the MCU, he was an actual captain in the army, he seems to possess top attributes in strength and intelligence (if not truly superheroic ones), and in the hands of actor Wyatt Russell, he’s more than a little smarmy. Halfway through the 40-minute episode, he’s trying to get Sam and Bucky to fall into line. By the end, he’s threatening them. “Stay out of my way.”

In the comics, Marvel fans know Walker as U.S. Agent. And Russell’s take on the character could certainly assume that role, too.

John Walker started out as an average American bro who grew up idolizing his veteran brother, but his own military service failed to give him the feeling of being a hero that he truly wanted. One downpayment on a back-alley superpowers program later, he got a job as the corporate-backed superhero the Super-Patriot, and spent much of his time arguing that (in the political environment of the mid-80s) he was a better representative of American values than Captain America.

Right around then, Steve Rogers quit being Captain America in a huff (which he does all the time), and just like in The Falcon and the Winter Soldier, the US Government appointed John Walker to be the new Captain America. The idea was that he seemed easier to browbeat into doing what they wanted than Steve “I could do this all day” Rogers, but Walker’s tenure as Cap was ignominious and tragic.

After his secret identity was revealed on live television, far-right terrorists assassinated his parents, which lead him into a mental breakdown in which he killed or maimed everyone associated with his outing and their murders. Eventually he resigned as Captain America so that Steve could come back, but things just got worse.

The same government officials who’d appointed him Captain America in the first place faked his death, brainwashed him into forgetting that his parents were dead, and made him into the U.S. Agent, a patriotic superhero who would do whatever the government asked him to without argument.

U.S. Agent has never been a villain exactly, but as a superhero he leaves a lot to be desired — there’s a limit to how much a reader can sympathize with how exploited he is by his government and traumatized he is by his experiences, simply because he’s such an unrepentant hard-headed jerk.

His introduction in The Falcon and the Winter Soldier was brief and without much context, so there’s no way of knowing how much of his comic book backstory showrunner Malcolm Spellman will use in the show. We’ll have to wait and see what happens in the next episodes of Marvel’s latest TV series.

Vox Media has affiliate partnerships. These do not influence editorial content, though Vox Media may earn commissions for products purchased via affiliate links. For more information, see our ethics policy.