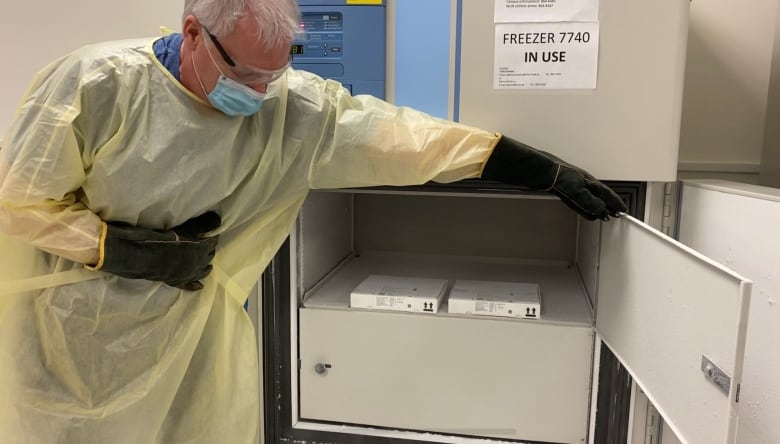 Newfoundland and Labrador is reporting 14 new cases of COVID-19 on Monday, with one of those in the Labrador-Grenfell Health Region.

That case is related to international travel, said Dr. Janice Fitzgerald, the chief medical officer of health, in a briefing Monday.

There are 407 active cases, with no new or outstanding presumptive cases — a drop from Sunday’s active caseload of 430.

Five people are in hospital — an increase of two people since Sunday, and the highest total since late April — while 37 people have recovered since Sunday’s update.

“We are beginning to see an encouraging trend,” said Fitzgerald, with more recoveries than new infections.

“I am cautiously optimistic that we are making progress but we are by no means out of the woods.… Our ability to see this through will depend on our continued patience and dedication.”

Cases are also beginning to skew older, she said, with fewer teenagers contracting the virus and more cases emerging in middle-aged people.

The province is on Day 14 of its two-week “circuit-breaker,” which introduced stricter public health restrictions that closed schools and non-essential businesses, and it has been 10 days since Fitzgerald moved Newfoundland and Labrador back to Alert Level 5.

1st case in Labrador-Grenfell in months

Happy Valley-Goose Bay’s town council demanded point-of-entry rapid testing for all travel into Labrador on Monday, after the region reported a presumptive positive case over the weekend.

In a media release the Department of Health said this case is military personnel and has been in self-isolation since arrival.

Monday’s update confirmed a case in the Labrador-Grenfell region, which encompasses all of Labrador and the northern part of Newfoundland. It’s the first confirmed infection in the area for months, after panic struck the north coast last week when a presumptive positive was reported in the isolated community of Makkovik.

The town council submitted its letter requesting point-of-entry testing to Fitzgerald on Monday, according to the town.

“Happy Valley-Goose Bay is known to be the hub of Labrador. Anyone traveling from the Island of Newfoundland and beyond coming to Labrador will ultimately enter via our community,” reads the letter.

In its letter, the town council says that while the result of a point-of-entry rapid test would be presumptive, and thus would need to be confirmed by the lab, “it would still be beneficial in preventing the spread of COVID-19.”

The town wants the testing at:

The PCs and NDP have frequently said point-of-entry testing should be implemented in the province.

But Fitzgerald has repeatedly said point of entry testing is not the best use of testing resources, and said again Monday that the province saves rapid tests for those with a higher risk of having the disease than the general population.

Furey has expressed a similar point of view.

“The point-of-entry [test], we’re concerned, may cause a false sense of security, and therefore cause extra disease spread, which wasn’t really reflected in the McMaster study to date,” Furey said in November.

However, Fitzgerald said public health has not ruled out the idea. “We will make some recommendations about that,” she said. “The variants are a game-changer.”

Nova Scotia is preparing to immunize the elderly this week, and its government plans to mail letters to those 80 and older to inform them of vaccine clinics.

Haggie said there are similar plans to do that in Newfoundland and Labrador, but the time isn’t yet right.

“There are arrangements to do that,” Haggie said, but indicated the vaccine supply isn’t yet stable enough to begin booking appointments for the general population.

“If we go out tomorrow and say, ‘Here’s how you schedule your vaccination,’ and we don’t have the vaccine for another three or four weeks, the challenge there is around people saying, ‘Well, you’ve forgotten about me,'” Haggie said. “It’s unfair to raise those expectations until we know for sure.”

He said he was told Monday morning there are more than 6,000 Pfizer-BioNTech doses en route to the province. However, by Pfizer’s own explanation, “until March rolls around, at the very earliest, they don’t see themselves making up the deficit from what they should have supplied,” Haggie said.

“I wait each week to see what the guaranteed tray number is for the next week.… Until we see the whites of the eyes of these vaccine trays, it’s difficult for me to give any kind of firm commitment.”

Haggie said the province gets a two-week notice ahead of its vaccine delivery, but said once the supply enters the province, he’s confident of a rapid and widespread immunization program.

“We’ve shown very clearly from our flu campaign that we can vaccinate 80,000 people a month, even in a pandemic,” he said.

Last week, the number of daily COVID-19 tests topped 3,000 three times, but Sunday’s total was 986. On Monday, the Department of Health said 1,037 people had been tested in the previous 24 hours.

A genome sequencing lab within the province that could help pinpoint which cases are caused by coronavirus variants — which was slated to open last week — has been delayed until at the least the end of the month, Fitzgerald said.

Eastern Health continues to recommend additional COVID-19 testing for everyone in the Mount Pearl Senior High School community, regardless of whether they have previously tested negative for the virus or do not currently have symptoms.

The health authority said there are concerns there may be people who went previously undiagnosed, or have developed symptoms since the initial testing blitz.

Fitzgerald said the second round of tests have already unearthed a few asymptomatic cases.

Her team is also looking at widespread wastewater testing to track fluctuating levels of the virus in communities. Sewage testing has already begun in the metro region, she said, and those efforts may be translated to other parts of the province, depending on the wastewater systems in use.

She said sewage tracking will become more useful as time goes on. “We’ll see if it picks up signals in the future,” she said.