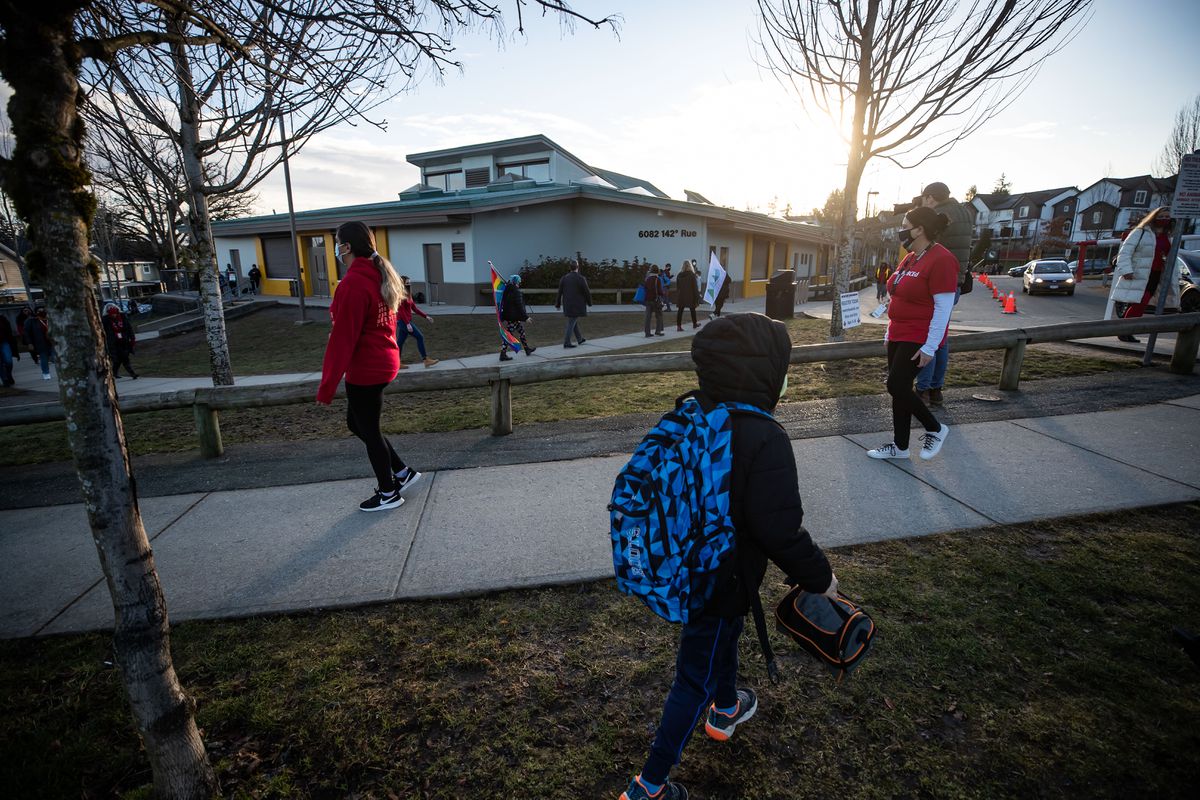 B.C.’s top doctor will not break a stalemate between the Education Minister and the teachers’ union over whether all elementary school students should be forced to wear masks in class.

After a more infectious variant of COVID-19 was recently linked to six schools in Surrey, the BC Teachers’ Federation on Monday called for individual school districts to be allowed to craft stricter rules than those posted by the province, such as requiring all children in elementary school to wear masks in the classroom.

Bonnie Henry, British Columbia’s Provincial Health Officer, said at a Tuesday media briefing that the current provincial guidelines have enough flexibility to allow individual principals and the teachers at their schools to keep children safe – even with the potential for exposures to the variant of COVID-19 that was first identified in Britain.

“So far, it does not look like there is significant transmission from these variants, which is really good, it shows us that the safety plans in schools are working,” Dr. Henry said.

She refused to endorse mandating that all elementary-school students wear a mask in class, as she did earlier this month for B.C.’s high-school and middle-school students.

“Absolutely it is important for teachers to encourage mask use where it’s appropriate in classrooms – these are the things that are individual-classroom and school-based,” she said. “We know as well that, when the safety plans that are in place in these schools are being followed, that they work. We have had a cluster of exposure events, but again, very little transmission so far.”

A day earlier, Education Minister Jennifer Whiteside told reporters at a news conference that her ministry is constantly working with Dr. Henry’s office, other health authorities and the groups within the education system to keep provincial school guidelines up to date. But, she said, individual districts are not allowed right now to enforce tougher rules on their own.

“We will learn from this situation, and if it is necessary to update the safety guidelines, that is a question we are constantly looking at,” Ms. Whiteside said on Monday.

Matt Westphal, who represents Surrey teachers for the BCTF, said a group of French immersion elementary-school teachers protested on Tuesday morning by marching single-file into school after word spread that up to 80 colleagues and students had to get tested because of potential exposure to a COVID-19 variant. (The Fraser Health Authority said on Monday that 300 students and staff would be tested by the end of Tuesday, and 35 staff had tested negative so far.)

Mr. Westphal, who represents more than 5,000 educators, said his union doesn’t understand why the province won’t allow Surrey’s school district, the biggest in B.C., to require younger students to wear masks. He said such a rule wouldn’t affect families in the same way a more drastic measure would, such as reducing class sizes by having students learn online more.

“It’s a little hard to take saying ‘no we’re not going to allow districts to do more.’ Why would you not want them to do that?” Mr. Westphal said.

In B.C., middle and secondary students and staff from kindergarten to Grade 12 are required to wear non-medical masks except when sitting or standing at their classroom seats or work stations, where a barrier is in place, or when they are eating and drinking.

Caroline Colijn, the Canada 150 Research Chair in Mathematics for Infection, Evolution and Public Health at Simon Fraser University, endorsed the idea of allowing individual districts to respond to local concerns by crafting rules above and beyond provincial guidelines. Updated modelling from Dr. Colijn’s lab shows that under the current public-health rules in B.C., exponential growth in case numbers could start in late March if a COVID-19 variant with a 40 per cent higher transmission rate became established.

With a report from The Canadian Press

We have a weekly Western Canada newsletter written by our B.C. and Alberta bureau chiefs, providing a comprehensive package of the news you need to know about the region and its place in the issues facing Canada. Sign up today.