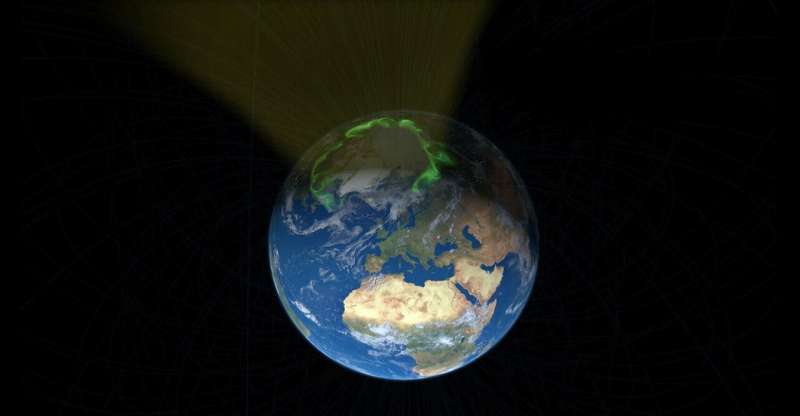 Using information from ESA’s Swarm satellite constellation, scientists have made a discovery about how energy generated by electrically-charged particles in the solar wind flows into Earth’s atmosphere—surprisingly, more of it heads towards the magnetic north pole than towards the magnetic south pole.

The sun bathes our planet with the light and heat to sustain life, but it also bombards us with dangerous charged particles in the solar wind. These charged particles have the potential to damage communication networks, navigations systems such as GPS and satellites. Severe solar storms can even cause power outages, such as the major blackout that Quebec in Canada suffered in 1989.

Our magnetic field largely shields us from this onslaught.

Generated mainly by an ocean of superheated, swirling liquid iron that makes up the outer core around 3000 km beneath our feet, Earth’s magnetic field is like a huge bubble protecting us from cosmic radiation and the charged particles carried by powerful winds that escape the sun’s gravitational pull and sweep across the Solar System.

Like a bar magnet, Earth’s magnetic field at the surface is defined by the north and south poles that align loosely with the axis of rotation.

The aurorae offer visual displays of the consequences of charged particles from the sun interacting with Earth’s magnetic field.

Until now, it was assumed the same amount of electromagnetic energy would reach both hemispheres. However, a paper, published in Nature Communications, describes how research led by scientists from the University of Alberta in Canada used data from ESA’s Swarm mission to discover, unexpectedly, that the electromagnetic energy transported by space weather clearly prefers the north.

These new findings suggest that in addition to shielding Earth from incoming solar radiation, the magnetic field also actively controls how the energy is distributed and channeled into the upper atmosphere.

The paper’s lead author, Ivan Pakhotin who is carrying out this research as part of ESA’s Living Planet Fellowship, explains, “Because the south magnetic pole is further away from Earth’s spin axis than the north magnetic pole, an asymmetry is imposed on how much energy makes its way down towards Earth in the north and south. There seems to be a differential reflection of electromagnetic plasma waves, known as Alfven waves.

“We are not yet sure what the effects of this asymmetry might be, but it could also indicate a possible asymmetry in space weather and perhaps also between the Aurora Australis in the south and the Aurora Borealis in the north. Our findings also suggest that the dynamics of upper-atmospheric chemistry may vary between the hemispheres, especially during times of strong geomagnetic activity.”

Ian Mann from the University of Alberta said, “The sun’s activity, such as mass coronal ejections, can have potentially serious consequences for our modern way of living. Therefore, studying the underlying physics of space weather and the complexities of our magnetic field is very important to building up early warning systems and designing electrical grids better able to withstand the disturbances the sun throws at us.

“We are fortunate that we have ESA’s three Swarm satellites in orbit, delivering key information that is not only vital for our scientific research, but can also lead to some very practical solutions for our daily lives.”

In orbit since 2013, the three identical Swarm satellites have not only return information about how our magnetic field protects us from the dangerous particles in solar wind, but about how the field is generated, how it varies and how the position of magnetic north is changing.