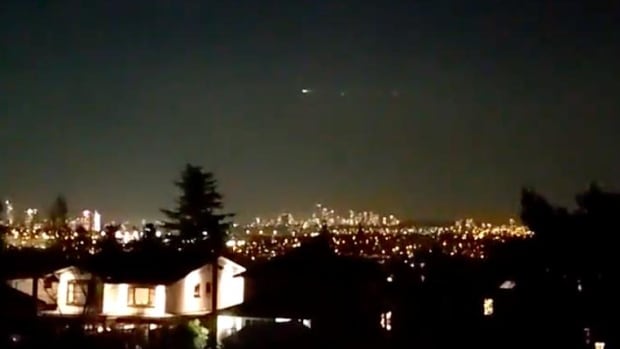 A cluster of bright, falling lights lit up the skies over B.C.’s South Coast and much of the U.S. Pacific Northwest on Thursday night, the suspected result of rocket debris burning up as it reentered the atmosphere.

Videos of the phenomenon were posted on social media by residents of the Seattle area, Oregon and B.C.

On Vancouver Island, the Saanich Fire Department tweeted that it had “received reports of flames in the sky” from multiple callers.

“We are much better at investigating fires on earth. The cause of this fire in the sky is still under investigation,” the fire department joked.

Jonathan McDowell, an astrophysicist at Harvard University, tweeted that the cause appeared to be the remains of the second stage of a Falcon 9 rocket used by SpaceX to launch a satellite earlier this month.

The U.S. National Weather Service in Seattle has said there is not expected to be any impact on the ground.

The Falcon 9 second stage from the Mar 4 Starlink launch failed to make a deorbit burn and is now reentering after 22 days in orbit. Its reentry was observed from the Seattle area at about 0400 UTC Mar 26. pic.twitter.com/FQrBrUoBHh

VIDEO: People across the South Coast, through Washington State & Oregon, were astounded by a massive moving lightshow in the sky. At least one astronomer says it’s the second stage of a Falcon 9 rocket breaking up. Video from Aaron Mackee on the North Shore. @CBCAlerts @cbcnewsbc pic.twitter.com/dT1noSnATk