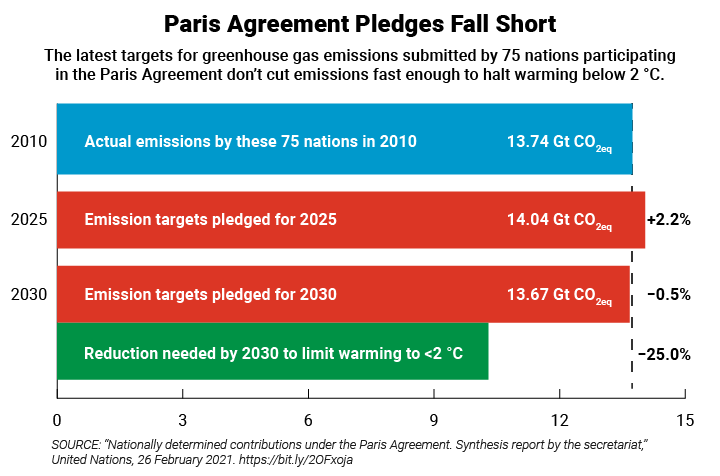 After decades of frustrating lack of progress in direct-air capture of CO2, the idea has suddenly caught fire. Recently, the U.S. Congress approved $447 million for R&D projects, United Airlines announced a multimillion-dollar initiative, and Microsoft launched a billion-dollar fund to invest in carbon removal technologies.

What’s driving the new enthusiasm? In a word, angst. “The world can’t get to 1.5 °C without carbon removal,” Microsoft argues in a thoughtful white paper detailing its strategy. But after surveying the options, the company concluded that “a distinct carbon removal market simply doesn’t exist today.”

A Nature Communications paper published in January and covered by Anthropocene, as well as by a provocative article in WIRED, analyzed how well a “wartime-like crash deployment” of direct-air capture systems could actually slow global warming and ultimately reverse it. The results can be used to make solid cases both for and against a major push to roll out direct-air capture projects now, though the technology is still immature, expensive, and unproved.

Let’s briefly consider the arguments for and against.

The Case for Going Big Now

1.  Emissions aren’t coming down fast enough. We can’t wait any longer to start ramping up negative emissions. In an eye-opening report on Feb. 26, the United Nations totaled up the latest emission-reduction pledges countries have submitted under the Paris agreement. To limit global warming to 2 °C or less, net CO2 emissions need to drop by about 25% from 2010 levels by 2030. But the pledges so far put us on track for a reduction of less than 1% by 2030.

A study in Nature Communications concluded that massive scale-up of direct-air capture plants could remove around 2 billion tons of CO2 a year by 2050—a fair chunk of the 6 gigatons or so of net removals needed to make it likely we’ll stay within the 2° C warming limit. But even at an impressive 20% annual growth rate, the build-out would take decades to roll out the 800 or so plants needed by mid-century. If we wait too long to get started, production capacity just won’t be there in time.

2.  Proof-of-concept projects show that some approaches work and could scale up during the 2020s. United Airlines is funding Carbon Engineering’s extraction plant in Texas and expects it to pull a million tons of CO2 each year from the air once it comes online in 2025 or later. Climeworks is working with Carbfix and an Icelandic geothermal utility on a much smaller-scale project that will sink 4,000 tons a year of CO2 into basalt, starting this year. But suitable geological formations in many parts of the world (Carbfix has made a nifty map of them) could in theory soak up billions of tons of the gas. And instead of pushing CO2 down into the rock, basalt dust could be brought up to the air and spread across vast tracts of farmland, using existing technologies and infrastructure, as Anthropocene has reported.

The Case for Waiting

1.  To meet the urgency of the problem, we must spend limited budgets on the most cost-effective ways to curtail emissions now. Scientific American nicely illustrated the results of a meta-analysis that compared techniques for scrubbing carbon dioxide out of the atmosphere, from reforestation and soil sequestration to biochar and bioenergy with CO2 capture. Costs per ton removed were 3–4 times higher for direct-air capture than for the other options. Indeed, the Nature Communications study reckoned that mass deployment of DAC systems would cost 1–2% of global GDP—many trillions of dollars—over the next few decades. That’s a hefty opportunity cost.

2. Future carbon-removing systems will likely be far more energy efficient and profitable than they are today. Microsoft and the U.S. Department of Energy are spending nearly all of their budgets for this technology on R&D and startup ventures. That’s smart, because the carbon-removing machines we have today are too expensive and inefficient to build in large quantities. They consume so much energy, cement, and steel that they actually generate lots of emissions themselves. What’s more, scientists have been making rapid progress inventing new ways to turn CO2 into useful—and profitable—products, like fuels, plastics, and fibers. Today, most direct-air-capture schemes would produce only exceedingly expensive carbon-offset certificates.

3. The demand for removals to offset emissions shows the moral hazard this technology creates for polluters. It’s easier to count and audit tons of CO2 squirted underground than emissions avoided. But, as WIRED’s story points out, the greenwashing problem that has plagued carbon-offset markets could undermine the effect of direct-air capture as well, by creating an easy out for big polluters. And the hazard is not just a moral one: there’s a real risk that CO2 could leak back into the air much faster than expected—particularly if a build-it-fast mentality lets CO2-injection companies operate with too little regulation and oversight. A slow-and-steady approach will allow regulators time to keep up with the evolving technology.

What to Keep an Eye on

1. Microsoft’s portfolio of carbon-removal contracts. The company has taken the lead at the moment in scouting for—and vetting—carbon-removal schemes. It is looking to sink millions of tons of CO2 and has set aside hundreds of millions of dollars to do it. So far, just 0.1% of its portfolio is direct-air capture; look for that to grow in coming years.

2. Elon Musk’s $100 million prize for new carbon-removal tech. The billionaire has joined with the XPRIZE Foundation to create a $100 million, four-year global competition to elicit improved technologies for pulling carbon dioxide from the atmosphere that can scale to remove 10 gigatons by 2050. By October 2022, the top 15 teams will be selected. Watch for clever ideas to emerge as teams demonstrate working prototypes able to remove at least a ton of CO2 a day.

3. How well BP and other oil giants succeed at multibillion-dollar carbon-sequestration projects. Carbon dioxide makes up just 0.04% of air, so it’s far easier to grab it from concentrated streams at chemical plants. But the project in England that BP is leading to gather CO2 from lots of factories and refineries and then pipe it 90 miles out to porous rocks under the North Sea will test government, market, and industry forces that will be crucial for the success of underground burial of carbon—whether it’s sucked from the air or pulled from other sources.