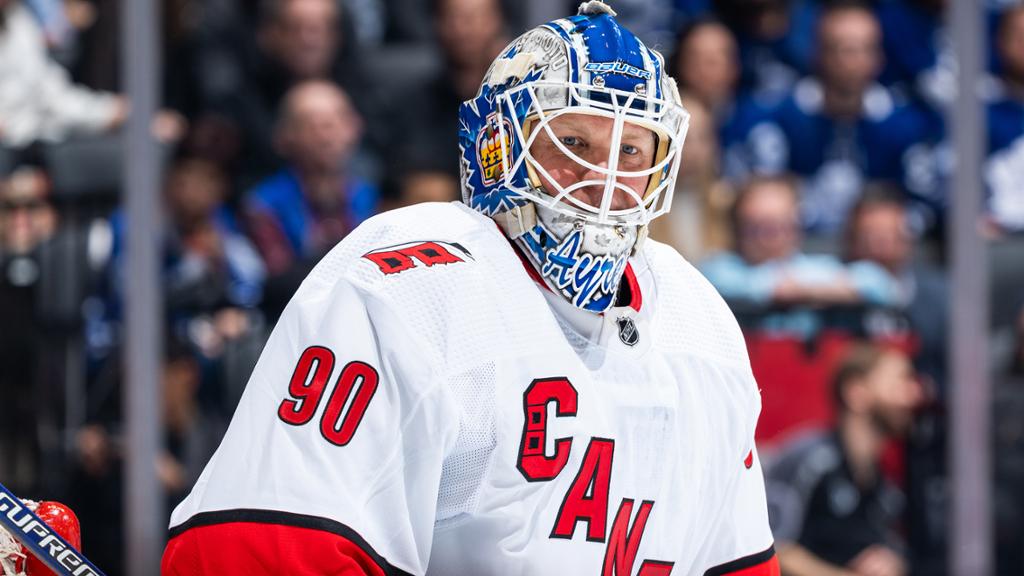 David Ayres can’t believe it has been one year since he went from being a maintenance operations manager to one of hockey’s best Cinderella stories in one memorable night.

Working at the Mattamy Athletic Centre (formerly Maple Leaf Gardens), Ayres had spent eight years as the practice goalie for the Toronto Marlies of the American Hockey League, with whom he’d also occasionally drive the ice resurfacing machine, and three for the Toronto Maple Leafs.

But Ayres had never played in an NHL game, or even an AHL game, until he got thrust into action Feb. 22, 2020.

On that day, the then-42-year-old became the first emergency backup goalie to win an NHL game when the Carolina Hurricanes defeated the Maple Leafs 6-3 at Scotiabank Arena in Toronto. Ayres made eight saves in the final 28:41 after Carolina goalies Petr Mrazek and James Reimer each left because of injury, becoming part of NHL folklore.

“Even after all this time and everything that has gone on with the world, it’s still kind of surreal,” Ayres said. “It’s almost like something out of a Hollywood script. I guess Hollywood thinks so, too, since I’m consulting with the writers on a movie Disney is doing on it.

“I think people can relate because it’s kind of the story of an everyday person getting his shot, his moment in the sun. It’s nice that it can put smiles on people’s faces in COVID times.”

Those same people have made sure to let him know it, too.

“Over the past year, someone has reached out pretty much every single day in some way or another about the game, whether it be at the grocery store, an interview, a podcast or via social media,” he said. “Some want to talk about being at the game, others just want to say congrats.

So does walking into his living room at his home in Bowmanville, Ontario, located about 50 miles east of Toronto.

Behind the couch where he sits to watch Hurricanes games is a locker he set up to pay tribute to the team that provided him the biggest thrill of his hockey career. The locker is in full view and contains all sorts of memorabilia, including the equipment he wore that night and a white jersey presented to him by the team autographed by Carolina fans.

“It was one of the biggest moments of my life, and I wanted to pay tribute to that,” Ayres said.

Hurricanes general manager Don Waddell said he had no idea of the locker Ayres has at home.

“That’s great,” Waddell said. “I mean, stories like this don’t happen very often. He took advantage of an opportunity. If we don’t win that game, no one would remember it like this. But we did, and they do.

“When David came down to Raleigh shortly after that game, he was bigger than Gov. [Roy] Cooper. And I’m friends with the governor. He was actually texting me about David during the game he was forced to step into. Shows you how this story is so much bigger than a hockey story.

“The other thing this story did is to allow us to support David in some of the causes he is fighting for relating to kidney foundations.”

Ayres received a kidney transplant from his mom, Mary, in 2004 and thought he’d never play hockey again, adding another layer to his memorable tale.

Because of COVID-19 protocols, Ayres can’t be in Raleigh to celebrate his one-year anniversary Monday, when the Hurricanes will host the defending Stanley Cup champion Tampa Bay Lightning at PNC Arena (7 p.m. ET; ESPN+, FS-CR, SUN, NHL.TV). However, Waddell said a ceremony will be held even without him in the building.

Ayres said he has taped a message for Hurricanes fans expressing his thanks, but that will be just part of an extremely busy day he estimates will feature countless interviews, including a podcast from Sweden and a 1-on-1 with NBCSN.