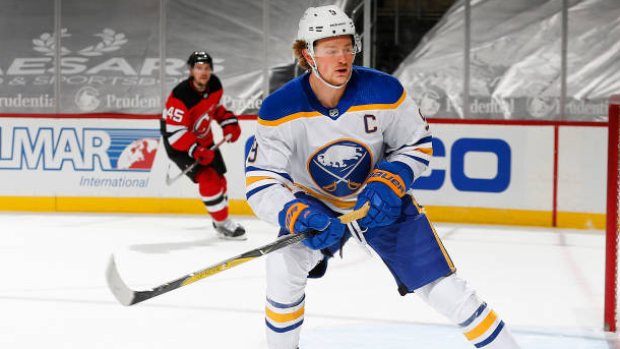 Jack Eichel has just two assists in five games since the Buffalo Sabres’ extended layoff due to COVID-19 protocols, leading to questions regarding his health.

Sabres head coach Ralph Krueger insisted after Monday’s 3-2 loss to the New York Islanders that Eichel is not playing hurt, stating the 24-year-old is just going through a slump.

“No. No, he’s not,” Krueger said. “For me, it’s a confidence factor. He needs to stick with it and persevere.

“If you look at Taylor Hall today also, six shots on net, posts again. They need to stick with it, and they need to believe and work through this and then get our five-on-five game going on their backs. But other than Toby Rieder, everybody was healthy in this game.”

Eichel has two goals and 13 points in 15 games this season after scoring a career-high 36 goals and posting 78 points in 68 games last season.

Hall, who signed a one-year deal with the Sabres in October, has just one goal and 10 points in 15 games this season.

The struggling Sabres dropped to 5-8-2 with Monday’s loss while struggling winger Jeff Skinner served as a healthy scratch.

Skinner, in the second season of an eight-year, $72 million contract, has just one assist in 14 games this season.

“There will be underlying messages, of course, anytime somebody doesn’t play,” Krueger said of scratching Skinner, per The Athletic. “But in the end, the decisions are for the team and for the group and for the chance to win. I just think it’s good for Jeff to take a look once from the outside. We’ve got coaches active with him, working together to have him come back an even stronger player for us.”

Sitting last in the East Division, the Sabres will visit the New Jersey Devils on Tuesday.