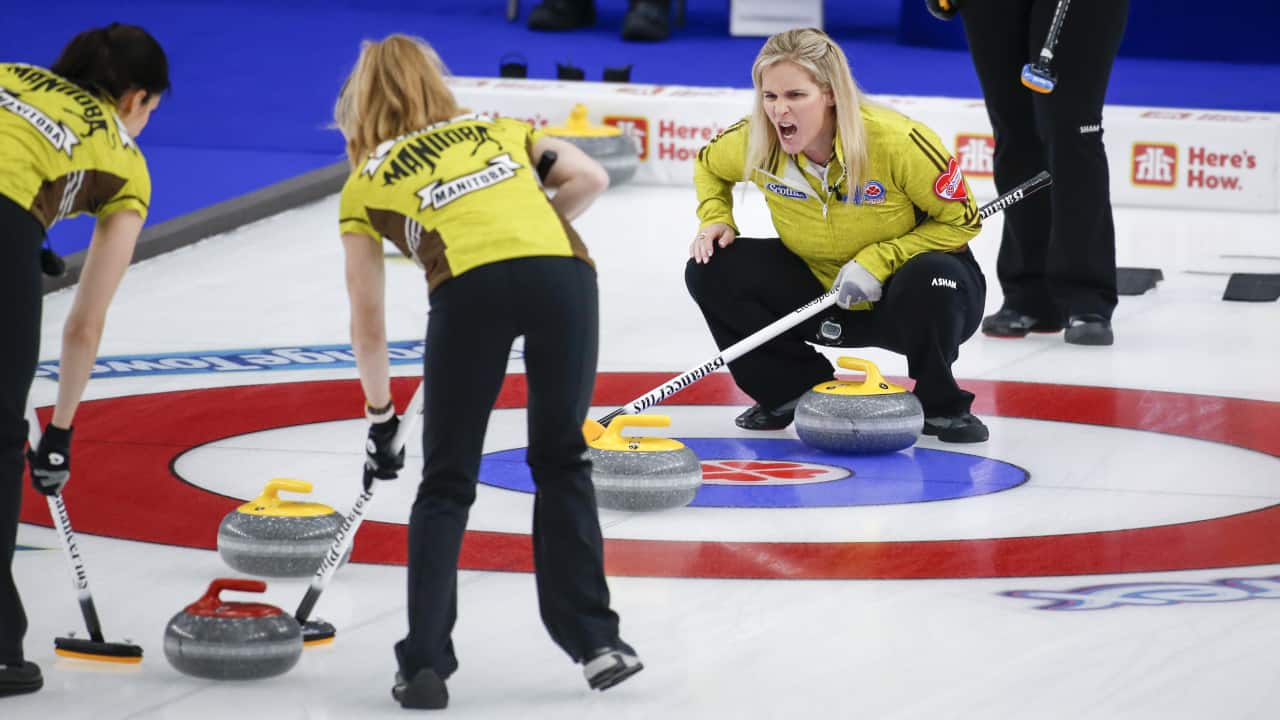 Athletes setting significant records in their sport are often too busy achieving those milestones to process their place in history at the moment.

What helps Jennifer Jones wrap her head around a career 153 wins at the Canadian women’s curling championship is seeing them through the eyes of people she loves.

Jones became the career leader in wins at the Scotties Tournament of Hearts with a 6-5 win Tuesday over Newfoundland and Labrador’s Sarah Hill.

Jones arrived at the 2021 Tournament of Hearts two back of the 152 victories held by Colleen Jones.

🥇🥌🍁🦬
NEW RECORD: Congratulations to Jennifer Jones on setting the record for most career wins record at the Scotties Tournament of Hearts. #STOH2021 #HubCity2021 pic.twitter.com/kQYjKv94gh

Jennifer Jones knows the record would have meant a lot to her late father Larry, who died two years ago at age 80.

“My dad always loved the records,” Jones aid Monday. “He always followed all the records. I know he would watching from above, [be] very, very proud.

“It definitely means something to me. As you kind of approach the end of your career, just to be remembered for doing something that you love is pretty remarkable.”

The wins record is among many Jones holds in women’s curling.

If the six-time national champion prevails in Calgary, the 46-year-old from Winnipeg will be the only woman to win seven.

Should daughters Isabella and Skyla take up curling, the record book provides a compelling argument that their mother is the best to ever play the game.

“My kids do look at it. There’s a book with my name in it with some records,” Jones said.

“I hope if anything it just shows them that if you work hard, that dreams are possible. I just want them to have the best possible life and if this can have any impact on that, it’s absolutely incredible.”

The Team Manitoba skip is surprised on screen by her mom Carol and daughters Skyla and Bella. 3:15

Jones’ first win in 2002 was an 8-4 victory over Prince Edward Island’s Kathy O’Rourke, who is P.E.I’s alternate in Calgary this year.

Jones’ 153rd wasn’t a work of art as her team’s shooting accuracy was 80 per cent, but it was one Jones and her Manitoba foursome needed to get to a 3-2 record.

Sitting on 2-3 until their next game Wednesday wouldn’t have felt uncomfortable.

“We were grinding it out today,” Jones said. “We really needed this win to stay kind of in there in the competition.”

Other results at the Scotties

Quebec’s Laurie St-Georges topped Pool B at 4-1 ahead of Prince Edward Island’s Suzanne Birt at 3-1. Manitoba was knotted at 3-2 with Chelsea Carey’s Wild Card One.

B.C., Newfoundland and Saskatchewan were even at 2-2. Saskatchewan’s Sherry Anderson fell 7-6 to New Brunswick’s Melissa Adams, who won her first game. Nunavut was winless in five games.

Ontario’s Rachel Homan and defending champion Kerri Einarson at 4-0 were the only undefeated teams in the tournament heading into Tuesday’s Pool A draw.

The top four teams from each pool of nine at the end of the preliminary round Thursday advance to the two-day championship round and take their records with them.

The championship round’s top three will be Sunday’s playoff teams, with the No. 1 seed rewarded with a bye to that day’s final.

Jones has won everything there is to win in women’s curling, including two world titles a decade apart in 2008 and 2018.

“I can’t believe this is my 11th year with Jennifer and the girls,” Lawes said. “I still feel like I’m the 21-year-old kid when I joined the team.

“I was just so eager to learn from the best. I’ve always looked up to Jen. She’s a role model and how special is it to be able to play with people that you’re inspired by?”

Jones and former second Officer own the record for most Hearts final appearances (9). Dawn McEwen, who is pregnant and sitting out this year, played lead for Jones in seven of them.

Jones has appeared in the most playoff games (33) and shares the playoff win record (21) with Officer.

“I’ve been so fortunate to have the best human beings as teammates that have supported me throughout I don’t know how many years,” Jones said.

In her 16th Hearts appearance, Jones trails only Colleen Jones (19) for the most by a skip.