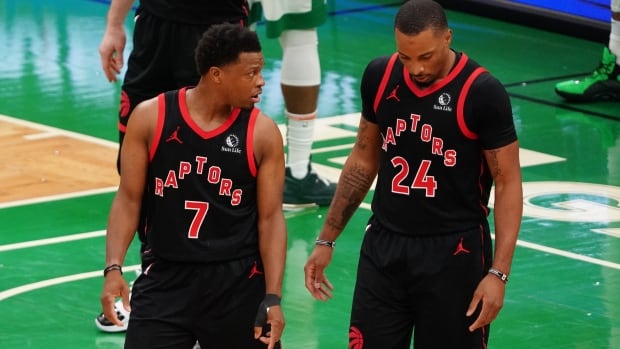 Kyle Lowry, on his 35th birthday, woke up as a Raptor — and remained one.

On a trade deadline day where moves were getting made right up until the last possible moment, Lowry — perhaps the biggest prize on the market — did not get traded, but Norman Powell did.

There had been speculation about Lowry right up to the close of the NBA’s trade deadline on Thursday.

In fact, Toronto entered the day expected to move either Lowry, Powell or both; in the end, it was just Powell, who went to the Portland Trail Blazers for Gary Trent Jr. and Rodney Hood. Those teams meet Sunday in Tampa, Florida, the Raptors’ home this season because the U.S.-Canadian border is closed because of the pandemic.

Powell is eligible to become a free agent after this season if he declines his player option.

The guard has increased his scoring average every season since Toronto acquired his draft rights in 2015 after Milwaukee selected Powell in the second round. He is averaging 19.6 points per game this season and is shooting 49.8 per cent from the field.

Trent is a restricted free agent after this season and Hood’s deal for next season is not guaranteed. The 22-year-old Trent is third on the Blazers in scoring, averaging 15 points. The 28-year-old Hood is averaging 4.7

Trent’s father, Gary Trent Sr., also was traded to Toronto from Portland in the Damon Stoudamire deal in 1998.

The Raptors (18-26) snapped a nine-game losing streak with a win over Denver on Wednesday. They are 11th in the Eastern Conference standings.

Questions swirled around Lowry all the way to the 3 p.m. EST deadline, and there were signs that the Raptors were positioning themselves to make the move. Toronto traded Matt Thomas to Utah and Terrence Davis to Sacramento for a future draft picks not long before the deadline opened up roster spots, which were necessary because anyone who obtained Lowry would have had to send multiple players to Toronto in order to make the salary ramifications work.