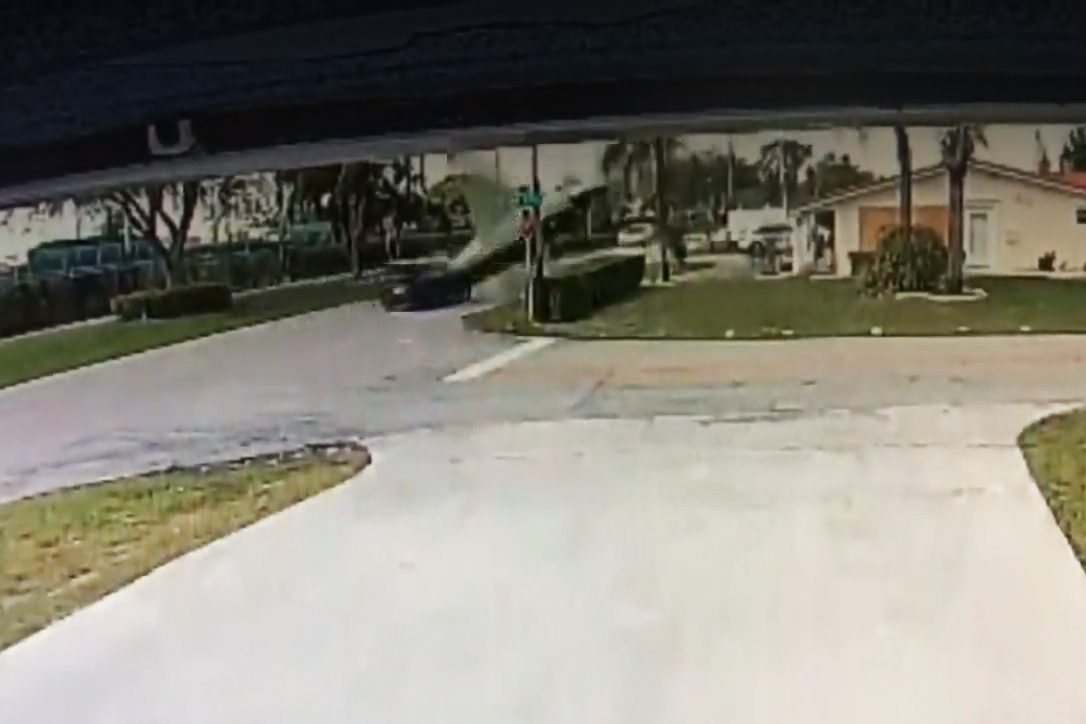 Three people have died, including one child, after a small aircraft collided with an SUV just outside an airport in Pembroke Pines, Fla.

The collision happened Monday afternoon on Southwest 72 Avenue, a road that runs directly alongside the edge of the North Perry Airport, according to Pembroke Pines police.

A dark-coloured SUV can be seen driving along the road when the plane abruptly nosedives into it from above at a 45-degree angle. The aircraft skids to the other side of the road, strikes the barrier fence and explodes into a ball of fire. The flames then quickly spread across the road.

The SUV is not visible after the crash in the surveillance video, but aerial footage captured later shows it as a burned-out, crumpled wreck at the side of the road near a tree.

Footage shows the aircraft and the SUV were on nearly perpendicular paths before the collision.

Both people in the plane were killed in the crash, fire officials told NBC Miami. The woman and child in the SUV were taken to hospital with injuries, and the child died later on Monday night.

The victims’ names have not been released.

The aircraft crashed shortly after takeoff around 3 p.m. on Monday, the FAA says.

“We heard like a bomb, like a tremendous noise and we went outside and everything was on fire, everything was bad,” witness Annabel Fernandez told NBC Miami and CBS Miami. “It was a mother with her kid and we don’t know what happened to them. The fire rescue came and they got them.”

It was Fernandez’s camera that captured the incident on video.

Witness Salah Elshaer says he immediately called 911 after the crash.

“All I see is some large black smoke (and) a huge fire coming right down the fence,” he told CBS Miami.

Authorities say a power line was also knocked down during the crash, and the area remained off-limits on Tuesday due to cleanup and repairs.

“Normally this is a concern about everybody around here because this has happened often enough to get concerned,” he said.

The FAA and the National Transportation Safety Board are investigating the crash.