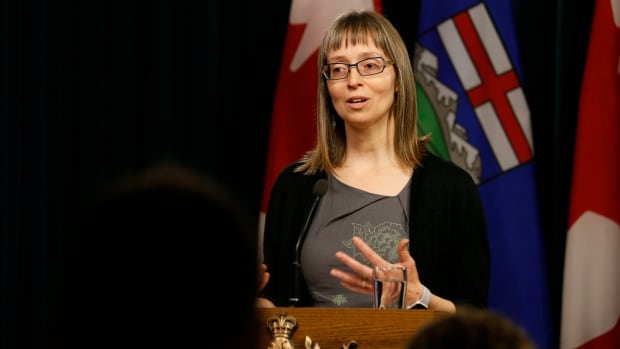 At least four in 10 new cases of COVID-19 in Alberta were acquired at home, says the province’s top public health doctor.

“The No. 1 riskiest activity is living in a household with someone who’s infectious,” Dr. Deena Hinshaw, the province’s chief medical officer of health, said Thursday at a news conference.

“And while people may think that that is an inevitable statistic, I would remind all of us again that while home is the place where we feel we can let our guard down, if somebody in a household starts to feel symptomatic, if somebody in a household has been exposed to a case of COVID-19, there are things that we can do in our households to prevent the spread within that group.”

Anyone with symptoms should stay away from other members of the household and get tested as soon as possible, said Hinshaw, who noted that free hotel rooms are available so people who need to can isolate outside the family home.

“Almost half” of all new cases come from households, Hinshaw said.

“There is no other activity that even comes close to that proportion of our new cases,” she said.

No matter what setting people are in, a restaurant, a fitness centre, at work, or at a social gathering — which are currently “against the rules” — some people seem to be letting their guard down, she said, and not following the public measures.

“We’re seeing spread across multiple settings, and that is the biggest problem that we collectively have the power in our hands to change.”

Alberta reported 764 new cases of COVID-19 on Thursday and another 191 illnesses linked to highly contagious variants of the coronavirus.

A total of 6,835 active cases were reported across the province, with 294 patients being treated in hospitals for the illness, including 55 in ICU beds.

Another three deaths were added to the toll, bringing the total to 1,976 since the pandemic began in March 2020.

Screening identified 191 new cases linked to virus variants. A total of 1,400 of the current active cases are linked to those variants, making up 20.5 per cent of the total.

The regional breakdown of active cases on Thursday was:

Alberta has been contending with rising hospitalization numbers and a surge in cases linked to variants of concern — trends that have delayed plans for further easing public health restrictions.

There is concern the variants will become the dominant strain and drive a third wave of infection. Hinshaw cautioned earlier this week that additional restrictions may be necessary to slow the spread and ease the impact on hospitals.

On Monday, as hospitalization rates began to increase, the province announced it would delay moving to Step 3 of its reopening plan.

During a news conference that day, Health Minister Tyler Shandro described the hospitalization numbers as a warning sign and said the decision to delay Step 3 was the responsible choice.

As of Wednesday, Alberta had administered more than 512,000 doses of COVID-19 vaccine, and another 418,000 people had signed up to be immunized.