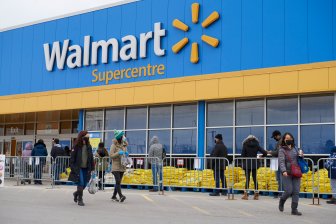 Former U.S. president Donald Trump on Tuesday publicly urged his supporters to get vaccinated against COVID-19 — even those who “don’t want to get it.”

Yet in the same phone conversation with Fox News host Maria Bartiromo, Trump acknowledged that the “freedoms” of those vaccine-hesitant Americans should still be respected.

Read more:
It would be ‘very helpful’ if Trump advised supporters to get COVID-19 vaccine: Fauci

“But again, we have our freedoms and we have to live by that, and I agree with that also.”

“It’s a great vaccine. It’s a safe vaccine and it’s something that works.”

Trump recommends to Fox viewers that they get a COVID-19 vaccine, even to people who don’t want to get it. pic.twitter.com/OECRqsBHN8

Trump and former first lady Melania Trump were vaccinated in January at the White House before his term ended that month, according to the New York Times and CNN.

“It’s a great vaccine, it’s a safe vaccine, and it’s something that works,” Trump said Tuesday.

In a PBS NewsHour/NPR/Marist poll released last week, about half of U.S. men who identified themselves as Republicans said they had no plans to get the vaccine.

Dr. Anthony Fauci, the top U.S. infectious disease expert, urged Trump on Sunday to push his supporters to get vaccinated, citing his popularity within the Republican Party.

Fauci said Trump “is a such a strongly popular person … it would be very helpful for the effort for that to happen.”

Trump told attendees at the Conservative Political Action Conference last month to get vaccinated, saying, “everybody, go get your shot” — the first time he had encouraged people to do so.

Fauci said on NBC’s “Meet the Press” program: “How such a large proportion of a certain group of people would not want to get vaccinated merely because of political considerations … it makes absolutely no sense.”

Trump said in the Tuesday interview that vaccines are “saving our country and (are) saving, frankly, the world.”

The other living former U.S. presidents — Barack Obama, George W. Bush, Bill Clinton and Jimmy Carter — have appeared in two public service announcements for the coronavirus vaccine alongside their wives, without Trump.

President Joe Biden, Vice-President Kamala Harris and other political leaders received their shots publicly to encourage Americans to get vaccinated.

— With files from Reuters